"Her seasons, her desires"

As a part from the collective textile installation made for Open Days of Artists Center in former Convent Levat in June 2021, my embroidery installation questions the place of women’s desire during their life, by evocating and put in perspective view some feminine destinies in the Belle de Mai neighbourhood in Marseilles.

During the pagan celebration of Belle de Mai, celebrating spring and the wakening of Nature, some teenage girls, – or were they prostitutes – the legend remains vague, were chosen, adorned and being perched on ladders at streets corners, and given to stares and kisses from passers-by in exchange of some presents.

In that same area, nuns from the congregation “Victims of Jesus Sacred Heart” which occupied the convent from 1841 to 2016, were cloistered, separated from the rest of the world, in self-sufficiency and out of time.

Between the ones, praised and subjected to others’ desires, to the others who choose to remove themselves from the world desires, how can a woman conduct her life according to her own desire, from her childhood to her old age?

This dress, whose minimalism refers to the nuns’ rough outfit, embellished by its hand embroidered network with, for some part, threads foraged in the convent’s attic, illustrates the desires and passions that cross the body and ages of a woman’s life.

Pictures by Cyril Becquart, except last one. 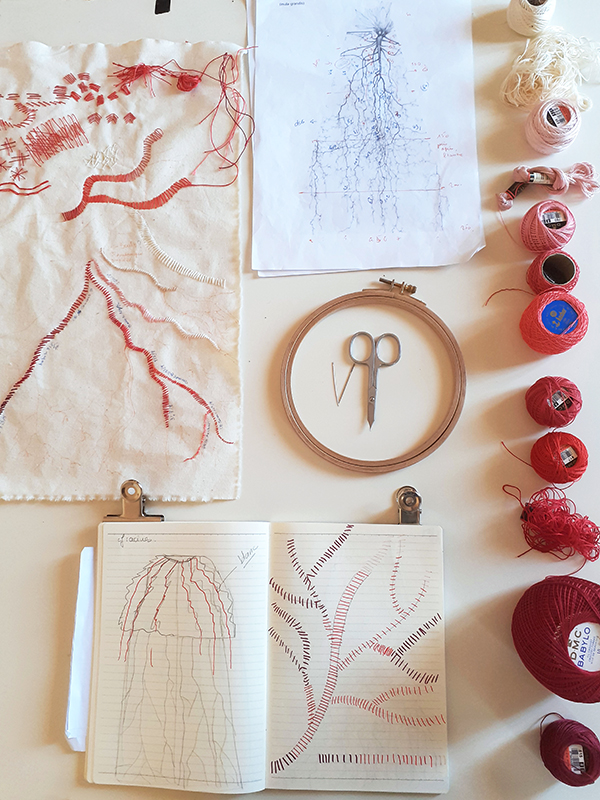 See more of my embroidery work